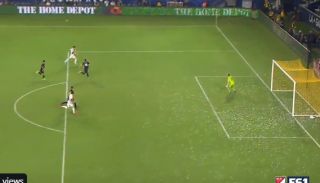 Zlatan Ibrahimovic continues to tear up the MLS as he celebrated a hat trick in LA Galaxy’s 7-2 thrashing of Sporting Kansas City.

The former Manchester United striker may be past his peak in terms of playing at the highest level in Europe, but performances like this do make you wonder if he could still do a job for some clubs in a more competitive league.

Ibrahimovic certainly looks a class above the defences he’s up against in the US, but he won’t mind as he continues to dazzle with some well-taken goals.

One save is not enough for Zlatan.@Ibra_official has tied the #LAGalaxy single-season goal scoring record ? pic.twitter.com/9JQmeHDasU