Chelsea came away from Molineux with a brilliant 5-2 win on Saturday, as Frank Lampard’s side put Wolves to the sword.

Goals from Mason Mount, Fikayo Tomori and a hat-trick from Tammy Abraham proved to be the difference for the Blues come full time, as the west London side bagged their second win over the season over Nuno Esperito Santo’s team.

It was a thoroughly impressive performance from Lampard’s men last weekend, who leapt up to sixth table following their win in the Midlands.

Given their result on Saturday, we’re sure Chelsea fans will be going into tomorrow’s home game against Valencia full of optimism, as their side look to get their Champions League campaign off on the best possible note with a win against Los Che.

For the match, we wouldn’t be surprised to see summer arrival Christian Pulisic start for Lampard’s side on Tuesday evening, especially seeing as he didn’t play at all against Wolves on Saturday.

The US international has been impressive in part for the Blues during his time at the club thus far, and we expect him to be given the chance to continue this tomorrow night.

During their 5-2 loss to Barcelona last weekend, Valencia’s midfield duo of Coquelin and Parejo looked a bit worse for wear, with the duo constantly giving the ball away to Barca’s high press.

Given this, Lampard should probably stick with the pairing of Kovacic and Jorginho in the centre of his midfield, as the duo have proven that they can both press consistently and effectively during their stints with the club, something that’ll come in handy against Los Che on Tuesday.

Rudiger is reportedly out of tomorrow’s game according to Lampard due to injury, thus we can expect to see either Kurt Zouma brought in back to his side’s starting XI following his admission against Wolves.

Frank reports that Toni Rudiger is out of tomorrow's game. 'Toni is injured. He's bothered a small groin problem that he's been carrying for a few weeks and will have a scan later today.'#CHEVCF

Given his side’s overall performance against Wolves, we doubt Lampard will be dropping many more players for his side’s match against Valencia, thus, this is how we expect the west London side to line-up for their Champions League opener tomorrow… 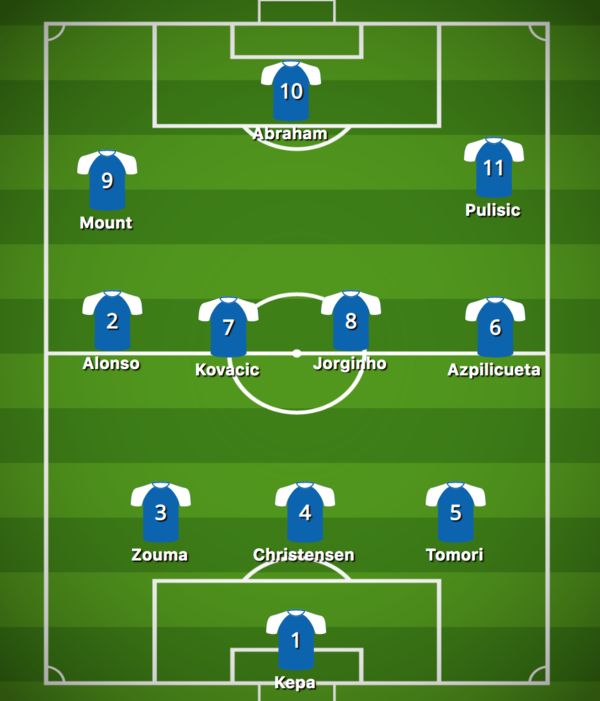