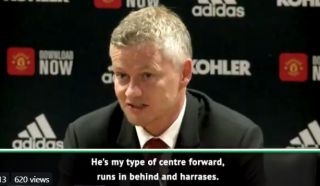 Manchester United manager Ole Gunnar Solskjaer has praised his defence for the way they handled Leicester City striker Jamie Vardy at the weekend.

In doing so, the Red Devils boss also dropped a possible transfer hint over Vardy, as he described him as his type of forward.

See the video above as Solskjaer heaps praise onto Vardy, who could make sense as a target for Man Utd after the sale of Romelu Lukaku in the summer.

MUFC failed to sign a replacement before the transfer deadline, but Vardy could no doubt do a job as a short-term option.

One to keep an eye on?