Barcelona start their 2019/20 Champions League campaign away to Borussia Dortmund tomorrow, as the Blaugrana look to get their CL season off on the right note with a win in Germany.

Ernesto Valverde’s side have arguably been placed in the group of death for this year’s Champions League, with the Spanish giants being paired with both Inter Milan and Dortmund, as well as Slavia Prague, in group F.

Barca go into the game in decent form, having won two of their last three games in all competitions, with the score line in both of these wins being a convincing 5-2.

Despite this form, some Barca fans will definitely be fearing the worst going into tomorrow’s match, as the club’s away form, especially in the Champions League, is far from good.

Valverde’s side struggle to win on the road, and have failed to win in both of their away trips so far this term, with the club losing and drawing to Athletic Bilbao and Osasuna respectively.

Thus, we’re sure Blaugrana fans will more than happily come away from tomorrow’s game with a draw, as they look to finish top of group F in order to get an easier draw in the knockout rounds.

For the match, Barca look to have both Messi and Suarez available for selection, however seeing as the duo have only just come back from injury, we doubt both will be starting tomorrow.

Although, Valverde has hinted that the Uruguayan could start the match if needed, which comes following his brilliant cameo display against Valencia at the weekend.

? Valverde: "We'll decide tomorrow whether #Messi is going to play. We weren't sure a week ago, but there's been a lot of progress. As far as Suárez is concerned, he might be there from the outset." pic.twitter.com/p3YeSscPGi

Given this, we can expect that youngster Ansu Fati will continue to start for the Blaugrana on Tuesday evening.

The 16-year-old was taken off early in the second half against Valencia following the goal and the assist he bagged in the first half, something that suggests Valverde was saving his energy for tomorrow’s game.

We can also expect Carles Perez to start as well, as the Spaniard looks to continue the impressive form he’s been in for Barca so far this term.

Arthur Melo was brought back in to Barca’s starting XI for Saturday’s game against Los Che, with the Brazilian being hugely impressive alongside De Jong and Busquets in the middle of the park.

Despite this being the first time the trio had started a game together, it looked as if they’d been playing in the same side for years, thus, Valverde would be mad to drop any of them for the game against Dortmund.

Seeing as no defenders picked up injuries against Valencia, Barca should start the same defence tomorrow following their decent performance vs Los Che.

Given all of this, we’ve decided a line-up that Barca should start with for their game against Lucien Favre’s side tomorrow evening… 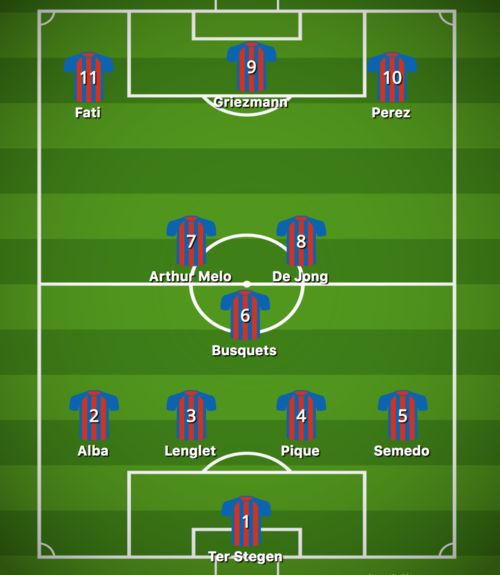