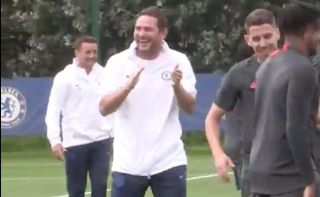 Spirits will be high at the Chelsea training ground this week after their impressive 5-2 win away from home at Wolves on Saturday.

Although the Blues are undoubtedly conceding more goals than boss Frank Lampard would like, they look a real threat in attack and came back from the international break with an excellent response.

They’ll be hoping to take that goalscoring form with them into their clash with Valencia at Stamford Bridge in the Champions League on Tuesday night, while also looking to shore things up at the back to find the ideal balance to achieve success this season.

However, it certainly looks as though they were enjoying themselves in training on Monday, and Lampard was loving it too as he watched on as both Reece James and Tammy Abraham were nutmegged within seconds of each other.

Perhaps some of the more hard-nosed coaches and ones with an old-school mentality wouldn’t have been impressed with his players and their antics as they trained ahead of a big game, but Lampard’s approach is very different and it looks as though he enjoyed it as much as the players did.

He looked absolutely thrilled with the nutmegs and the reactions going round the group, and even disappeared from shot momentarily after the second nutmeg as he couldn’t quite contain himself.

Time will tell if they’re still smiling on Wednesday morning at Cobham, as they’ll hope to build some momentum and pick up another win to start their Champions League campaign this week but they’ll seemingly try to do so in a confident and positive mood.