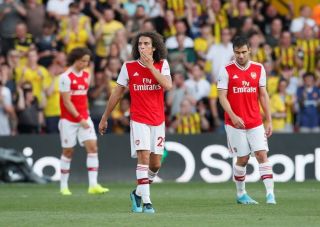 Watford clearly enjoyed their comeback from 2-0 down against Arsenal yesterday, especially as Matteo Guendouzi’s attempt to troll the home crowd at Vicarage Road spectacularly backfired.

The French youngster has generally been a quality performer for Arsenal since he joined last season, but he’s shown he still has a lot to learn with this rather unprofessional showing yesterday.

As he left the pitch to be substituted by Unai Emery, Guendouzi could be seen doing a 2-1 gesture towards the Watford home crowd, and it’s no surprise to see the club’s official Twitter page pounced on the opportunity to mock him over it later.

Following the Hornets’ comeback, they corrected Guendouzi with this tweet below…

It’s fair to say the 20-year-old probably won’t be trying something like that again any time soon as he’s been made to look rather silly.