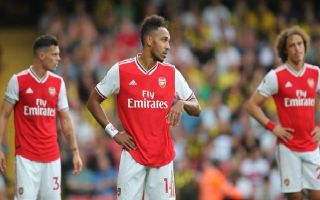 Pierre-Emerick Aubameyang feels that Arsenal’s defenders are giving away goals to the opposition following the club’s 2-2 draw against Watford.

A brace from the Gabon striker saw the Gunners take a 2-0 lead at Vicarage Road before goals from Tom Cleverley and Roberto Pereyra saw the Hornets level things up.

Arsenal could’ve easily bagged three points from yesterday’s match but their defenders prevented that from happening. A half-hearted pass from Sokratis eventually ended in Tom Cleverley pulling one back for Watford. Nearly 30 minutes later, David Luiz’s challenge on Roberto Pereyra saw the Hornets win a penalty which the latter himself scored.

Aubameyang was far from pleased with yesterday’s draw. As quoted by football.london, the striker said: “I feel like we are literally giving goals to the opposition. It is up to us to progress. I don’t want to accuse anyone, but you could say that us, the attackers, could have killed the game off & score a third goal so I am not going to say it is someone’s fault. Obviously we didn’t expect that. We knew that they were going to try & come back with good intentions, of the kind they demonstrated in the second half. Sadly, we were not able to deal with them well.”

Aubameyang has a point here. Arsenal’s defence has looked very shaky this season. The midfield and attack are looking fine but the same can’t be said of the backline. If Emery’s team are to play in the 2020-21 Champions League, they’ll have to be much better defensively.

Following yesterday’s draw, Arsenal are currently 7th in the Premier League table. Their next league fixture is against Aston Villa on Sunday but before that, the Gunners play Eintracht Frankfurt.