Arsenal manager Unai Emery’s poor work at the Emirates Stadium looks like being exposed as some truly damning stats emerge about his side’s stats since he took over.

The Gunners were known for being a bit of a soft touch and dodgy defensively under Arsene Wenger, but they at least played some stylish attacking football to make up for it.

That is no longer the case under Emery, and these shocking stats below show that the club has actually got even worse in some key defensive areas as well… 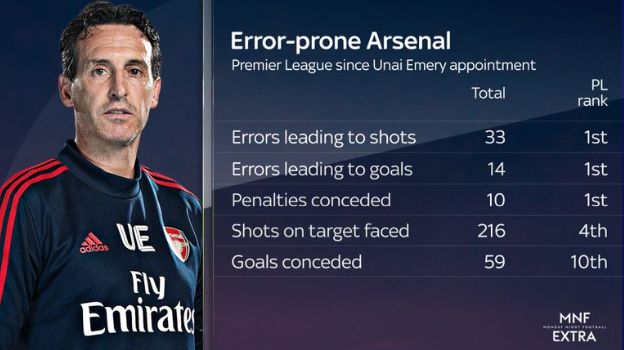 The Spanish tactician also has Arsenal fourth in the league for shots on target faced in that same time period.

This is far from good enough for a manager with a reputation for being extremely meticulous in his preparation and with supposedly so much eye for detail.

Some would argue Emery has inherited some poor players, with Granit Xhaka often shown to be a major liability with errors and rash tackles like the one that led to a penalty for Tottenham in the recent North London Derby.

Still, the Arsenal manager surely has to improve things fast or complains like these from fans are only going to get louder.