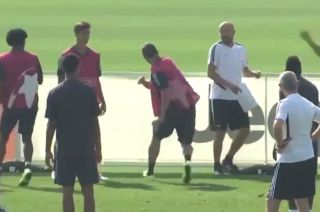 Juventus striker Gonzalo Higuain can be seen losing his temper in training once again having been spotted being at the centre of similar incidents twice already this year.

Watch below as the Argentine reacts furiously to missing the ball in a training session as he then appears to kick a coach and then viciously kicks the hoardings by the side of the pitch.

It’s not clear quite why Higuain was so wound up, but it does seem he has a problem with keeping his cool in these situations.

Below are incidents that also took place at Chelsea and AC Milan earlier in the year – two clubs he spent last season on loan with before returning to Juve this summer.

First, he put in a slightly over the top tackle on Milan manager Gennaro Gattuso in January, shortly before he left the San Siro for Stamford Bridge…

At Chelsea, he notably blew up at David Luiz before the Europa League final against Arsenal in this incident below that also seemed to anger former Blues manager Maurizio Sarri…