Juventus get their Champions League campaign underway with a crunch clash against Atletico Madrid on Wednesday at the Wanda Metropolitano.

The Turin giants will arrive in Spain having dropped their first points of the Serie A season at the weekend, having been held to a goalless draw by Fiorentina.

In turn, they’ll hope to get back to winning ways in midweek, as a win away against Atleti would give them a huge boost in their bid to top the group and qualify for the knockout stages.

Coach Maurizio Sarri will be forced into one key change though due to injury, with Douglas Costa coming off after just eight minutes against Fiorentina with an injury.

As a result, according to La Gazzetta dello Sport, that could see Federico Bernardeschi get the nod on the right flank in the usual 4-3-3 system, in what would essentially be a straight swap, as seen in the graphic below. 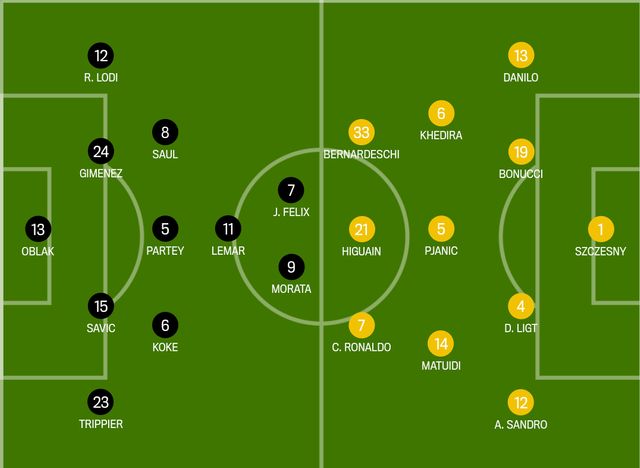 It’s still a significantly strong line-up from the reigning Italian champions, with Cristiano Ronaldo undoubtedly set to lead their charge having been exceptional in the Champions League throughout his career.

The experience and tenacity provided by stalwarts such as Blaise Matuidi and Sami Khedira in midfield will be crucial too while there should be a first appearance in Europe as a Juventus player for summer signing Matthijs de Ligt given Giorgio Chiellini’s injury setback.

Given the quality on the other side of the pitch in Diego Simeone’s team though, it promises to be a difficult challenge for Juve, but ultimately it’s one that they might feel they need to pass in order to prove their credentials in Europe this season.