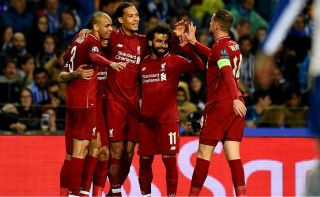 Liverpool were locked in a difficult clash with Napoli at the San Paolo on Tuesday night, but one man shone more so than others for these fans.

The Merseyside giants will know how difficult the trip to Naples is from last season, and so they have a hard task to make a winning start to the defence of their European crown this year.

Both sides had chances in the first half as their attacking quality was on show as well as the defensive class at both ends, but it was Fabinho who seemingly impressed these fans the most.

As seen in the comments below, Liverpool fans were delighted with the shift that the Brazilian ace put in, as he looked commanding throughout the opening 45 minutes and helped the visitors win that particular battle.

It continues a positive start to the season for him, but time will tell whether or not the Reds can pair that with quality in the final third to come away with all three points.

While the likes of Fabinho and the backline are giving them a solid platform to go out and win games, the attacking trident weren’t at their clinical best in the first half in midweek to put away some of the chances created.

Nevertheless, the general focus from the fans below at half-time was on Fabinho’s performance, as they were keen to praise him and he’ll hope he can respond with an equally effective second half.

Fabinho in that first half pic.twitter.com/aq9bddiHHZ

Decent first half, very tough ground and team so not expecting an easy one! But Fabinho is BEAST! What a player! Just need a goal now!