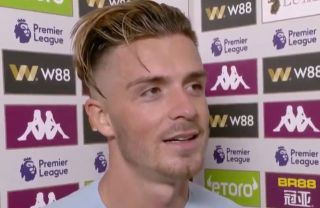 Aston Villa and West Ham Utd shared the spoils in their goalless draw at Villa Park on Monday night, with the hosts failing to find a way past the Hammers.

That was despite the visitors being reduced to 10 men in the second half, as Villa seemed to lose their way and run out of ideas as the game went on.

Jack Grealish had a late chance to seal the win but ultimately fluffed his lines, while he also had to put in a defensive shift too as he produced a crucial block on Declan Rice as West Ham remained a threat on the counter attack.

Speaking after the game to Sky Sports, the Villa captain revealed how he joked with his rival about how it should have been the other way round with Rice closing down Grealish and denying him a goal instead of the opposite way round.

Fortunately for Dean Smith’s side though, Grealish was there to make the crucial intervention, although they’ll all be disappointed that they weren’t able to secure a win.

“Dec said on the pitch that ‘we should swap roles, it should be me shooting and him blocking’,” he revealed to Sky Sports in his post-match interview. “But it’s what I have to do now when I am playing central midfield.”

Villa have collected just four points from their five games so far this season, leaving them just above the relegation zone. With that in mind, they’ll be eager to put some wins together and start to climb the table and get away from the drop zone in the coming weeks.