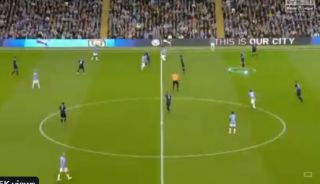 Gary Neville has insisted he wasn’t to blame for the opening goal in Vincent Kompany’s testimonial match last week.

Martin Petrov notably scored after being given acres of space on the left-hand side, with right-back Neville miles away from the action.

However, as you can see in the rather amusing video above, the former Manchester United defender laid the blame on his fellow pundit Jamie Carragher, who had also stepped up way out of position.

Which of these Premier League greats do you think was at fault here?