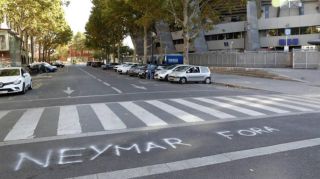 PSG take on Real Madrid in their Champions League opener tomorrow, with the French giants set to do so without talented Brazilian Neymar in their side.

Neymar was banned for a few games by UEFA earlier this year following a rant he made towards officials after PSG’s loss to Man United, and given the recent actions of some fans, it seems like some fans wouldn’t have wanted to see the forward play tomorrow night anyway.

As seen in the tweet above, which is from Mundo Deportivo, fans have painted the words ‘Neymar Fuera’ outside the Parc Des Princes, a phrase that translates to ‘Neymar Out’.

Seems like things are just going from bad to worse for the Brazilian lately!