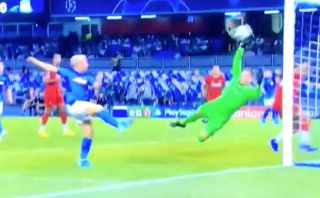 Napoli came out the blocks quickly in the second half against Liverpool, but fortunately for the visitors, Adrian was on hand to prevent them from going behind.

Despite it being goalless after 45 minutes, it was a thrilling encounter between the two sides at the San Paolo as they both had chances and played with intent.

SEE MORE: ‘Immense once again’ and ‘he’s a beast’ – These Liverpool fans full of praise for star after first half vs Napoli

However, no one came as close as Dries Mertens to breaking the deadlock, as the Belgian international surely must of thought that he was set to give Napoli the lead after drifting in at the back post to apply the finishing touch.

Unfortunately for him, Adrian had other ideas as he produced a superb save to deny him, as seen in the video below, as he seemed to hang in the air and stretch out his right hand to divert the ball away from goal.

It was a world-class effort from the Spaniard, with Mertens visibly in disbelief that he hadn’t broken the deadlock as these two sides continue to press for a breakthrough in a crucial opening game of the group stage.

That is some save by Adrian…pic.twitter.com/8epc6gWeKL

On his Champions League debut, Adrian has just pulled one right out of the top drawer to deny Dries Mertens ? pic.twitter.com/D603fCTeal