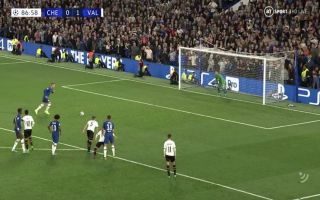 Chelsea midfielder Ross Barkley missed a penalty against Valencia which was awarded by VAR after a lengthy review from match officials.

The Blues were given the chance to equalise against the Spanish outfit in a Group H Champions League clash this evening, but Barkley fluffed his lines from 12 yards.

The English ace insisted on taking the spot-kick ahead of Jorginho and Willian, after being introduced to the action as a second-half substitute.

Unfortunately, Barkley was left red-faced after firing his effort against the crossbar, with Chelsea ultimately succumbing to a 1-0 defeat in front of their own fans.

Check out Barkley’s miss below.

It’s a howler from Ross Barkley! He steps up to take the penalty but strikes the woodwork, and Chelsea still trail with just minutes remaining. #UCL pic.twitter.com/ojBhTjPeDZ