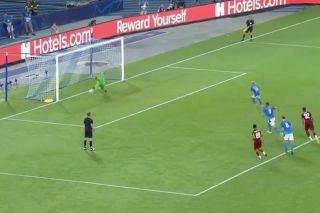 Napoli opened the scoring late on against Liverpool as Dries Mertens scored from the penalty spot after a contentious decision from the referee.

Andy Robertson was judged to have fouled Jose Callejon in the box in the 81st minute, although replays suggested that there was minimal contact.

Nevertheless, even after a VAR check as to whether or not the referee had made a clear and obvious error, the penalty was given and Mertens went on to squeeze his effort past Adrian.

The Liverpool goalkeeper may well feel annoyed that he wasn’t able to keep it out having got a strong hand to the spot-kick, as seen in the video below, but ultimately it wasn’t enough to prevent Mertens from breaking the deadlock.

Napoli were looking to inflict defeat on the Reds in their first outing in the defence of their European crown this season, just as they did against the Merseyside giants last season at home.

This could be a big moment in Group E… ?

Jose Callejon wins a penalty, Dries Mertens dispatches it to put Napoli 1-0 up.