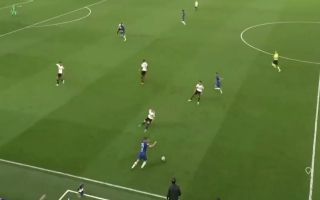 Chelsea midfielder Willian failed to finish after receiving a superb lofted pass from Mateo Kovacic against Valencia on Tuesday night.

The Blues fell to a surprise 1-0 defeat in a Champions League Group H opener at Stamford Bridge, thanks to Rodrigo’s 74th-minute goal for the visitors.

Chances were few and far between for Frank Lampard’s side, but Willian might have done better after being played through on goal by Kovacic in the first half.

The Croatian pinged a perfect 40-yard ball through to the Brazil international, who squandered the opportunity to score a volley after bringing the ball down expertly on his chest.

Check out Kovacic’s pass and Willian’s wild effort below.