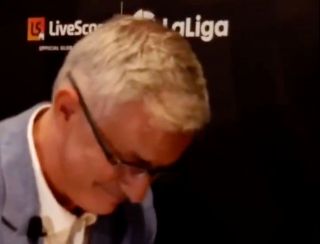 Jose Mourinho was asked a relatively straight-forward question in a quick-fire quiz feature he was participating in, but the former Man Utd boss ended up struggling.

When asked for three English defenders that he has previously managed, he instantly replied with John Terry and Gary Cahill from his Chelsea days.

However, as seen in the video below, it was at that point where he started to struggle, despite the glaringly obvious choices he had during his stint at Man Utd.

It appears as though both Chris Smalling and Phil Jones have slipped from his memory though, as he couldn’t name either of them and ultimately ran out of time despite the fact that they are the two most recent choices he could have picked.

Whether it was an innocent case of forgetfulness on the part of the Portuguese tactician or a very subtle dig, he did look as though he was genuinely struggling but that doesn’t say much about Smalling and Jones who evidently didn’t make much of an impression on him.