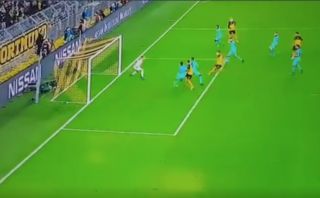 Marc-Andre Ter Stegen proved to be Barcelona’s hero yet again tonight as the German produced a brilliant double save in the second half.

Ter Stegen had already stopped a penalty during the second half after Marco Reus failed to convert his spot-kick after Sancho was fouled in the area.

This game has been breathtaking!! Ter Stegen has been invincible tonight (totally stole the show)!! One of my all time favorite Champions League matches!!#ChampionsLeague #BVBFCB #BVBBarca #UCL pic.twitter.com/H5e0tPhgrm

And the shot-stopper showed his brilliance yet again in the second period, as he came up with a simply superb double save to prevent his side from falling behind.