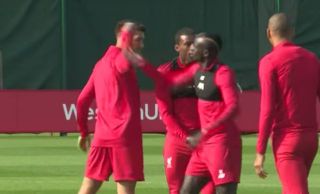 The recent talk of a spat between Mohamed Salah and Sadio Mane has been put to bed, but these Liverpool fans feared a new issue in training this week.

After the Merseyside giants uploaded a video of their training session ahead of their clash with Napoli, there was an incident around the 11-minute mark in the clip below where Mane and Roberto Firmino appear to have an exchange.

It’s important to note that the pair were seen in conversation just seconds later as it didn’t appear as though there was an issue at all, but some fans were left asking the question as to what it was about in the comments section on the video.

“What’s going on there,” a fan asked, while another added: “What the hell is up between Mane and Bobby?”

Other supporters were on hand to downplay the situation, as it looks as though Firmino was simply uninterested in being held back by his teammate at that particular time and there is no other concern to take away from it.

Nevertheless, after Mane’s furious reaction when substituted against Burnley, it’s perhaps only natural that there would have been a little concern from some fans over what this was all about as they hope to see the players build on their impressive start to the season.