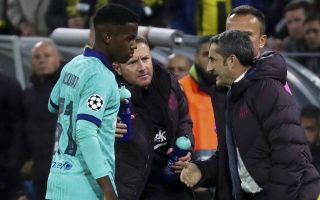 Barcelona teenager Ansu Fati will reportedly be offered a new 5-year contract following his recent performances for the Blaugrana.

The 16-year-old already has two goals and an assist to his name in four appearances for the Catalan club across all competitions. Last night, he became the youngest Barcelona player to feature in a Champions League match at 16 years and 321 days.

According to the Daily Mail, the Blaugrana are eager to tie Fati down to a new five-year contract which will have a release clause of €100 million.

Tying the Guinea-Bissau-born winger down to a new contract would be highly beneficial for Barcelona given how he has started. Provided he maintains his good form, we could see a lot more of Fati as the season progresses.

After last night’s goalless draw against Borussia Dortmund, Barca who are fifth in the La Liga table, play Granada on Saturday. With Lionel Messi back to full fitness, it will be interesting to see if Ernesto Valverde starts Fati.