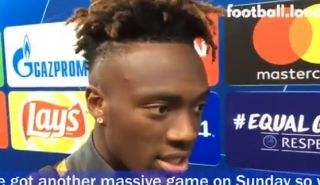 Chelsea striker Tammy Abraham has fired a warning of sorts to Liverpool ahead of their big game in the Premier League this weekend.

Speaking after the defeat to Valencia in the Champions League, Abraham said he and his team-mates were unhappy with the result.

? "We just have to take our anger out against Liverpool." pic.twitter.com/g7Fdqal9nr

However, he vowed to take his anger out on Liverpool when they come to Stamford Bridge on Sunday, so the Reds will no doubt have to be ready to take on a wounded animal.

Jurgen Klopp’s side, however, were also beaten in the Champions League as they suffered a 2-0 defeat away to Napoli that they’ll be looking to bounce back from as well.