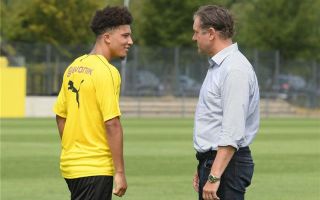 However, he says Dortmund refused to enter into talks over the exciting young England international, who has been a revelation in his time in Germany.

MORE: Rashford and Martial out – how Man United could line up if they bag £240m Solskjaer transfer targets in exciting rebuild up front

ZORC: – Manchester United were asking us. We didn't talk to them.

Sancho has been linked with Man Utd for as much as £100million by the Manchester Evening News and others, and it makes sense that he’d be someone the Red Devils were keen on.

The 19-year-old has shown he is one of the biggest prospects in world football and he’d surely prove a major upgrade on any of MUFC’s current attacking players.