There are a few personal favourites when it comes to former players trying to patronise and belittle the opinions of those who weren’t able to play at any sort of level themselves. Right up there is the line “well if you played at any sort of level you would understand”.

Gary Lineker didn’t use those words directly but it’s implied in his tweet sent out late this evening:

Interesting: by and large on here, journalists seem to think @GarethBale11 deliberately used his arm, footballers know he didn’t.

Firstly lets start of with the main issue surrounding the goal that VAR disallowed. Bale is unfortunate because it doesn’t look like he intends to use his arm, but the ball clearly bounces down onto his arm before he scores.

Unfortunately for Gary, he seems to completely miss the point as his argument is utterly irrelevant in this case. The rules no longer look for ref’s to identify if the handball offence was deliberate or not. They simply state it is an offence if a player has possession after the ball touches their arm/hand and go on to score or create a goal scoring chance. 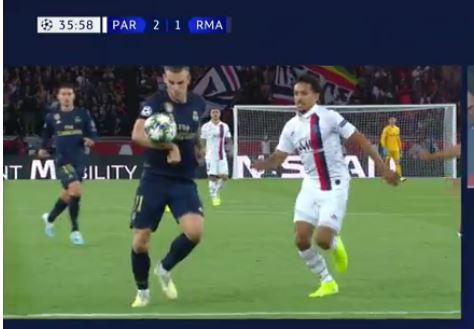 It’s unfortunate, but the ball clearly hits his arm

There’s little doubt that the contact with Bale’s arm is accidental, but it no longer matters. As much as you might disagree with the decision or the laws themselves, for once the VAR system worked and made a decision based on the laws of the game.

Of course if you haven’t played professional football in the past it doesn’t actually matter what your opinion is on the matter.