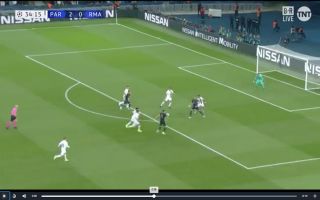 Real Madrid superstar Gareth Bale scored possibly one of the best goals that the Champions League has ever seen, unfortunately the strike against PSG was disallowed.

Former Premier League star Gareth Bale hit the back of the net with one of the best strikes that the Champions League has ever seen, unfortunately the winger’s strike was disallowed after a VAR review.

The Welshman seemed to have pegged back Paris Saint-Germain immediately after they made it 2-0 against Los Blancos through Angel Di Maria.

Bale picked up the ball just outside the box and showcased his great skill to juggle the ball in the air before launching a stunning volley at goal, former teammate Keylor Navas had no chance of stopping the strike.

After a consultation with VAR, it was deemed that Bale used his hand to control the ball before launching his sensational effort at goal.

Check out the Welshman’s goal below:

This closeup angle shows the handball from the superstar:

We were really an arm’s length away from seeing one of the best goals in Champions League history.