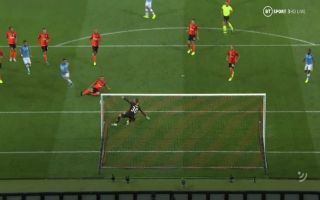 Gundogan very nearly grabbed the opener on Wednesday night, hitting the post with a curling strike in the 24th minute, which Riyad Mahrez turned into the net.

The Algerian turned provider 14 minutes later, cutting in from the right-hand side before slipping Gundogan through on goal, who took the ball in his stride before producing a superb finish to double City’s lead.

Pep Guardiola’s side are 2-0 up at half-time and could go on to score a few more if they continue in the same vein during the second period.

Check out Mahrez’ great work on the wing and Gundogan’s clinical strike below.