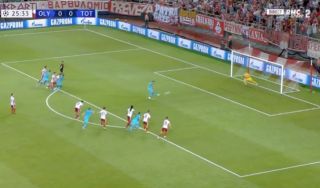 Harry Kane was on hand to convert from the penalty spot for Spurs tonight, as the club’s talisman handed his side the lead against Olympiacos in their Champions League opener.

Before the penalty was given, the home side were largely dominant against Mauricio Pochettino’s side, with the Greek outfit even hitting the woodwork minutes before Spurs’ goal.

After Kane was fouled in the area, the England international dusted himself off, stepped up and converted the penalty moments later to give the away side a 1-0 lead.