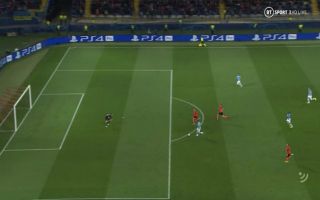 Manchester City have extended their lead over Shakhtar Donetsk to 3-0 in Ukraine, thanks to a clinical Gabriel Jesus strike.

The Premier League champions went in at half-time two goals up, thanks to a Riyad Mahrez tap-in and an Ilkay Gundogan effort shortly before the interval.

City have continued to dominate in the second period and finally been rewarded for their efforts after a lighting fast break-away which caught Shakhtar cold.

Kevin De Bruyne played an incisive through ball from the halfway line into the path of Jesus, who produced a brilliant finish to all but ensure City will open their latest Champions League campaign with three points.

Check out the Brazilian’s goal below.