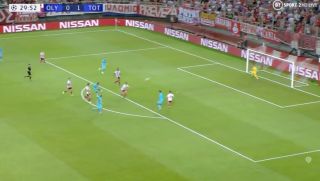 Lucas Moura was on hand to double Spurs’ lead in their Champions League opener today, as the Brazilian scored a superb 20-yard strike following some fine pressing from Ben Davies.

Having just gone 1-0 up thanks to a strike from Kane from the penalty spot, the north London side soon found themselves two goals to the good thanks to Lucas.

Spurs are two goals to the good in Greece thanks to a brilliant strike by the Brazilian! pic.twitter.com/xjrHqiiGTj

After Davies won the ball back high up the field, Lucas soon found himself in some space outside the area, as he hammered the ball home to given the away side a two-goal advantage.

Lucas continuing where left off from last season in this competition!