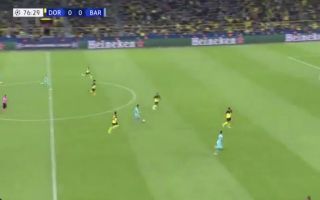 Lionel Messi was unable to inspire a victory for Barcelona against Borussia Dortmund after being introduced as a second-half substitute.

The Argentine missed the start of the 2019-20 campaign through injury, after sustaining calf damage in training towards the end of pre-season.

Barcelona have certainly missed their all-time record goalscorer, recording two wins, a draw and a loss in their first four La Liga matches, but his return to action at Westfalenstadion did not go quite as well as expected.

Messi showed signs of rust after coming on as a substitute for 16-year-old Ansu Fati around the hour mark, proceeding to give the ball away on a number of occasions while lacking his usual composure in the final third.

Barca ended up drawing their Champions League opener at Dortmund 0-0 and supporters will surely hope that a talismanic superstar gets back to his best as quickly possible in order to inspire a turnaround in results.

Check out Messi’s highlights in Germany below, via Twitter.

This video makes me laugh. Like VVD, Messi had a poor game. Don’t overreact. But at the same time, imagine the response if Ronaldo or Pogba put in a performance like this. pic.twitter.com/ppFr9R3bXV

This guy is just too good. The skills, the movement…
Oh My World! ??? pic.twitter.com/Mq8ipwzgtH