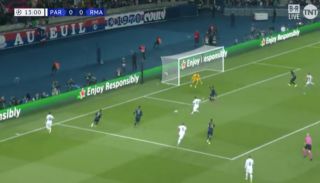 Thibaut Courtois make an error for Real Madrid tonight, as he let a tame Di Maria effort in at his near post to give PSG the lead in their Champions League opener.

With the scoreline sat at 0-0, the ball was put into the box by Bernat, with Di Maria latching onto it before firing home at the near post past the Belgian.

Ángel Di María gives #PSG the lead against his former club. Well-worked move down the left with Icardi and Bernat, and then Di María beat Courtois at the near post.#PSGRMA #UCLpic.twitter.com/CPtzAUYqfp

PSG On The Board?

Ángel Di María puts one to the back of the net against his former club, and they lead Real Madrid 1-0!pic.twitter.com/qhPFOR224a

It wasn’t the best effort from Di Maria, one that Courtois should definitely have done better with, something these fans certainly seem to agree on if these tweets are anything to go off!

Courtois is trash. Navas saves that

Navas > Courtois any day of the week. Stupid mistake from Madrid.

Please sell courtois and give us back Navas. ??

Navas saves that btw, Courtois sleeping at his near post smh

I bet navas saves that but y’all got that bum??