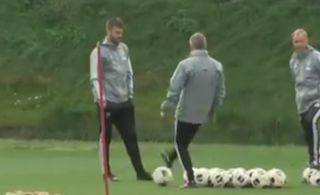 Manchester United manager Ole Gunnar Solskjaer still looks as though he could do a job up front for the Red Devils.

The Norwegian was a key player for some of Sir Alex Ferguson’s best Man Utd sides, and he’s shown that old quality is still there with this lovely trick shot into a bin.

Could Ole Gunnar Solskjær still do a job up front for Manchester United? pic.twitter.com/CTIqJKWle8

Watch above as Solskjaer enjoys himself in United training ahead of their Europa League clash against Astana this Thursday.

With Marcus Rashford misfiring at the moment, Solskjaer may well be tempted to put himself on at some point soon!