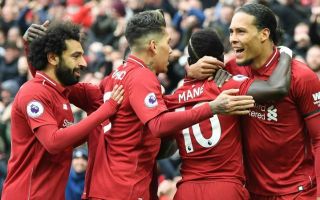 Liverpool are reportedly in talks with Sadio Mane over the possibility of renewing his contract to keep him at Anfield until 2025.

The 27-year-old has been a pivotal player for Jurgen Klopp since joining the Reds, going on to score 65 goals and provide 23 assists in 130 appearances.

Having firmly established himself as an important part of their continued pursuit of major trophies, the Merseyside giants will surely be desperate to secure his long-term future.

That is what they’re attempting to do according to La Gazzetta dello Sport journalist Nicolo Schira, as per his tweet below, as he claims that the two parties have opened talks over a renewal which will see Mane’s new contract run until 2025 in a deal worth €13m-a-year.

#Liverpool are in talks with Sadio #Manè to renew the contract until 2025. Reds have offered a new wages: €13M a year. #transfers #LFC

The Senegal international’s current deal runs until 2023, as per transfermarkt, and so it would ultimately see him commit for another two years while the touted €13m-a-year figure is presumably an increase on what he currently earns in order to help convince him to pen a new deal.

Time will tell if the reported talks lead to an agreement, but with Mane continuing to play a vital role in Liverpool’s pursuit of more silverware and given he’s seemingly enjoying his football and playing at a very high level, there doesn’t seem to be much reason for him to move elsewhere any time soon.

With that in mind, a contract renewal could suit both parties, and it would certainly be a welcome bit of positive news after the Metro note that he has recently downplayed talk of any issues between himself and Mohamed Salah after his furious outburst at Burnley prior to the international break.