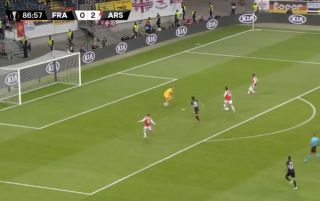 Pierre-Emerick Aubameyang scored a fine goal for Arsenal this evening, as he handed the Gunners a 3-0 lead against Eintracht Frankfurt in the Europa League.

Having already been 2-0 up thanks to goals from Saka and Willock, Aubameyang made it three late on in the second half following some fine play from Saka.

After losing the ball, 18-year-old Saka was quick to press Frankfurt and win the ball back almost immediately before playing in Aubameyang, who slotted home with ease.

A comfortable scoreline on what was a far-from-comfortable night for the Gunners!