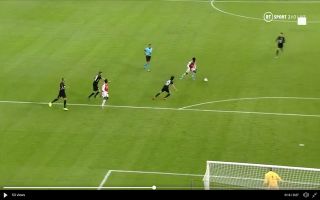 Arsenal ace Bukayo Saka has scored his first goal for the Gunners in spectacular fashion, the starlet curled in this lovely effort against Eintracht Frankfurt tonight.

Arsenal youngster Bukayo Saka scored his first goal for the north London club in their Europa League opener against Bundesliga side Eintracht Frankfurt this evening.

After a fast-paced counter-attack from the Gunners, club-record signing Nicolas Pepe laid the ball off to Saka and the England youth international curled the ball into the top corner with a superb effort from just outside the box.

Check out the academy graduate’s amazing strike below:

Saka looks a lovely player for Arsenal already, capped off with a sweet goal! ?? pic.twitter.com/BpW07AvrrU

Arsenal have a talented crop of youngsters who are firmly knocking on the door of the first-team this season.

No wonder the Gunners’ Hale End academy is considered to be one of the best in the world.