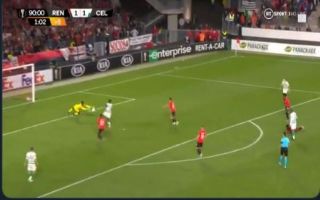 In some ways it’s comforting to see some horrendous refereeing in European games involving Scottish clubs. It reminds us that continental refs are just as incompetent as the home grown ones.

This decision is completely astounding, Bayo follows up on a shot and jumps past the keeper who collects the rebound. All is fine until the keeper decides to clutch his head as if the Celtic man has given it a good thump on the way past.

The replays show it’s an awful piece of play acting and the ref has been completely conned. It’s even worse because he waves it away and clearly lets the reaction of the Rennes players influence his decision.

“That is ridiculous. The ref must have been influenced!”@chris_sutton73 was not convinced as Vakoun Bayo was sent off shortly after coming on as a sub for Celtic…

It certainly does look like the referee changed his mind without consulting his assistant ? pic.twitter.com/dxEnBMyGYc

To make it even worse, the wonderful governing body will likely not let Celtic appeal given it’s a second yellow card. I’ve heard rumours of some sort of video review system that should be able to sort everything out, apparently it’s not managed to appear in football yet…