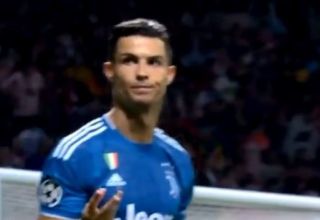 Cristiano Ronaldo has explained the hand gesture that he was spotted making towards the Atletico Madrid fans during their clash with Juventus.

The two sides met in the Champions League on Wednesday night and played out a 2-2 draw at the Wanda Metropolitano.

Juan Cuadrado and Blaise Matuidi had put the visitors in control, but goals from Stefan Savic and Hector Herrera rescued a point for Atleti while Ronaldo went agonisingly close to scoring a stunning late winner.

Aside from his search for a goal, the Portuguese superstar also grabbed attention with a gesture that he was seen making to the home crowd, who naturally gave him a special reception given his previous ties with rivals Real Madrid.

As noted by Goal Italy, the gesture came shortly after that missed chance, and as seen in the video below, it appeared as though he was taking a swipe at them about potentially being worried that he had just shattered their hopes of securing a point.

However, as seen in the second video below, he insisted that it was a hint that they should “learn”, given he has been a thorn in their side for many years.

It remains to be seen who has the last laugh in terms of who tops the group and goes through, but Ronaldo clearly isn’t going to be in the good books of the Atletico Madrid fans any time soon.