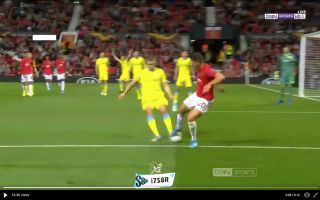 In the 33rd minute of Manchester United’s match with Astana, attack-minded right-back Diogo Dalot showed off some lovely dribbling by effortlessly gliding past one of Astana’s defenders with a superb turn that was almost like a roulette.

Unfortunately the 20-year-old’s cross didn’t manage to find any of his teammates.

Check out the Portuguese ace’s fancy footwork below:

Here’s how some fans reacted to the ace’s lovely skill:

Skill from Dalot ??? what a talent #MUFC #GGMU

Dalot wasn’t used in a traditional full-back role this evening, Ole Gunnar Solskjaer gave the youngster the licence to float in a right-wing position whenever United were in position.

Solskjaer’s decision could prove to be a masterclass in the future, Dalot is an attack-minded player and the Red Devils should do their best to allow the ace to flourish in games like today.

Take a look at this, some United fans at Old Trafford decided to troll their visitors with a hilarious chant based on a very popular film.