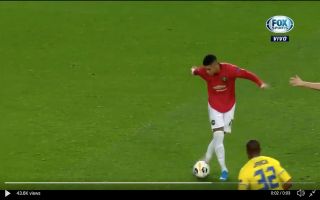 The Europa League certainly delivers with the thrills and spills, Manchester United star Marcos Rojo shocked fans by pulling off a flawless rabona pass vs Astana.

Manchester United defender Marcos Rojo bizarrely decided to attempt a rabona pass in his first appearance for the Red Devils since April.

The versatile defender’s pass struck one of Astana’s players and didn’t manage to find of his teammates.

While the decision may seem strange, United fans should be pleased to see that the ace is tapping into what you’d think would be a natural Argentinean flair.

Check out the moment of magic from the defender below:

To be fair to the aggressive centre-back you’ve got to roll the dice to win big, just imagine the scenes if this pass was accurate.

Take a look at this, some United fans at Old Trafford decided to troll their visitors with a hilarious chant based on a very popular film.