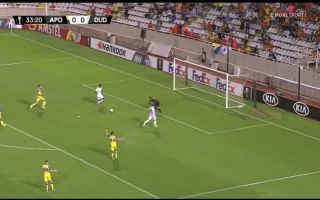 We’ve probably all missed a sitter like this at some point, the thing is most of us aren’t professional players playing in the group stages of a major European competition.

Laurent Mendy will be relieved Dudelange managed to win this game despite his awful miss, because you can be sure his team mates would point the finger at him if they didn’t.

There’s no other way to describe it, the ball doesn’t bobble, it’s an open goal, the keeper can’t get there and he doesn’t have anyone putting pressure on him.

In some ways, failing to get a proper contact on the ball is worse than it would have been if he put it over the bar.

That’s the standard to beat so far for miss of the season,