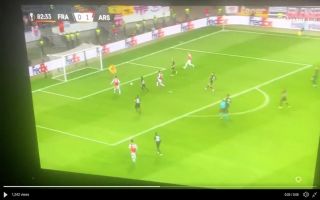 Arsenal talisman Pierre-Emerick Aubameyang shocked fans when he missed a glorious chance to score for the Gunners in their Europa League tie vs Eintracht Frankfurt.

In the 82nd minute of Arsenal’s Europa League opener against Eintracht Frankfurt this evening, Premier League Golden Boot winner Pierre-Emerick Aubameyang stunned fans by missing a sitter for the Gunners.

A perfectly-weighted pass from defender Calum Chambers left Aubameyang free to tap the ball into the essentially open goal, the ace must’ve been put off by something as he fired his close-range shot wide of the net.

Take a look at the superstar’s surprise miss below:

Here’s how shocked fans reacted to the forward’s miss:

Aubameyang does miss far too many sitters. Another great ball by Chambers.

how many sitters does aubameyang miss consistently #afc

That miss was so Aubameyang…so Aubameyang. Never seen a top striker miss sitters like this dude.

Miss of the season from Aubameyang.. ?#Arsenal

Lmao how did Auba missed that, that’s the only player I would have wanted to be at the end of that chance.

How did Auba miss that ?

Auba ?? how did you miss

Fortunately Aubameyang’s miss didn’t impact the game, the superstar made sure of that by hitting the back of the net in the 87th minute to seal the three points.

It’s surprising to see that some Arsenal fans have jumped on to Aubameyang after his miss, it seems that the ace does miss some easy opportunities but that clearly still isn’t enough to stop the 30-year-old from hitting the back of the net.

As long as the star’s overall performance isn’t suffering, missing chances like this should be forgiven it seems like the only weakness in the forward’s game.