Usually international tournaments at youth level are a chance to see some players you’ve never heard of and give you some players to look out for in the future. This year could be different as we get the chance to see what an already established youngster can do against lesser opposition.

Ansu Fati has burst onto the scene this year with Barcelona to the point he already looks to be a fairly established member of the first team squad.

He was actually born in Guinea-Bissau before moving to Spain at the age of six. It wasn’t clear which national team he would declare for as he didn’t have a Spanish passport and Portugal were desperate to get him into their youth system.

That future looks a bit clearer after The Guardian confirmed the youngster had finally been granted his Spanish passport. He now looks certain to declare for Spain at this level and will play in the upcoming U17 World Cup.

We’ve seen in the past that players can still change their national team despite playing at youth level, so it will be interesting to see if Spain try to get him a senior cap quickly to ensure he’s locked in.

It’s fair to say most fans hadn’t heard of him before this season, yet he scored two goals in his first three La Liga games and was even trusted to start against Borussia Dortmund in the Champions League last week. 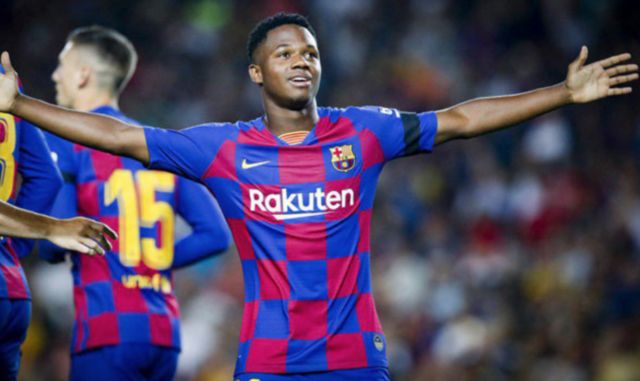 Fati will be playing for Spain in the U17 World Cup

He should be utterly dominant at youth level, so you have to fancy Spain will be among the favourites to win the upcoming U17 tournament.

It’s mixed news for Barcelona, they will be proud to see their youngster impress on the World stage, but they might be unhappy it’s for Spain and he will miss a few first team fixtures while he’s away.

Barcelona wonderkid beats out Real Madrid target to be named the best player under 20 in world football February 12, 2021 16:33
FC Barcelona