Inter face Milan in the Derby della Madonnina this weekend and Antonio Conte is being tipped to make crucial changes to his starting XI.

The Nerazzurri have a 100% record so far in Serie A this season, winning all three games while scoring seven goals and conceding just one.

In contrast, although Milan bounced back from their opening weekend defeat to Udinese with hard-fought wins over Brescia and Verona, Marco Giampaolo’s side haven’t entirely convinced.

With that in mind, Inter will arguably go into this derby as the favourites, and Conte could make changes to his starting XI to ensure that they get the right result.

According to La Gazzetta dello Sport, as per their graphic below, Conte could make three changes to the side that dropped points against Slavia Prague in the Champions League in midweek, with the spine of the side set to be altered.

Diego Godin, Nicolo Barella and Matteo Politano could all come in with Danilo D’Ambrosio, Roberto Gagliardini and Lautaro Martinez set to miss out and be benched.

Time will tell if Conte opts for those changes, but they would perhaps make sense to add more experience, quality and energy in the side in what could be a frenetic and high-tempo encounter.

What it does show though is that Inter have quality depth to compete on multiple fronts this season, and so they’ll be confident of not only securing all three points this weekend but mounting a genuine challenge to topple reigning Serie A champions Juventus. 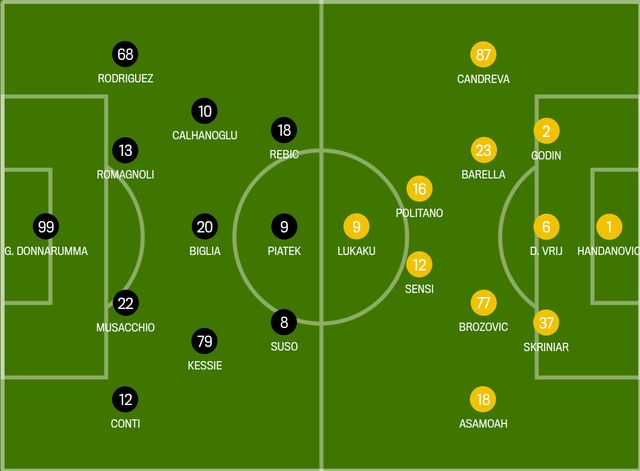