Juventus host Verona on Saturday evening looking to bounce back after dropping points against Fiorentina last time out.

The Turin giants were held in midweek too as they surrendered a lead against Atletico Madrid to draw 2-2 in their Champions League clash, and so Maurizio Sarri will be eager to get back to winning ways.

SEE MORE: Classy Emre Can gesture as Juventus star donates €10,000 for great cause

With Verona struggling so far this season, they’ll have a great opportunity to do so in front of their supporters, but Sarri is being tipped to rotate and make several changes this weekend.

As per La Gazzetta dello Sport in their graphic below, Gianluigi Buffon could get the nod in between the posts while Juan Cuadrado will shift to right-back and Danilo will go across to the left flank. 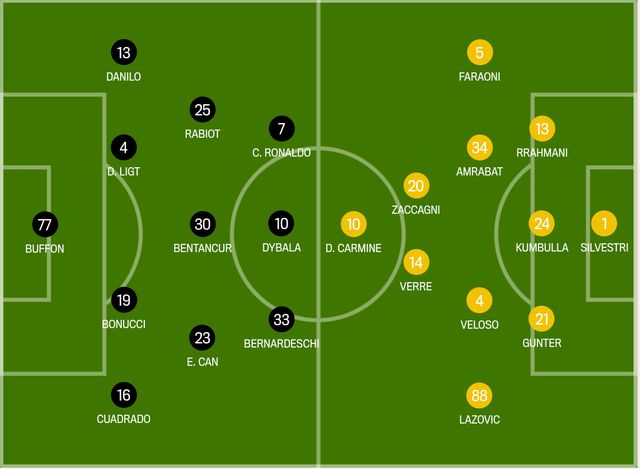 Adrien Rabiot, Rodrigo Bentancur and Emre Can are all being tipped to start in a midfield three which is where there is a complete overhaul from Sarri, while Paulo Dybala and Federico Bernardeschi could support Cristiano Ronaldo in the final third.

Time will tell whether or not Sarri opts to make so many changes, and while he will need to rotate and rest key players as the schedule becomes busier, he’ll also be wary of disrupting the balance in the side.

Nevertheless, with the quality of the players expected to come in, they should have more than enough to see off a resilient Verona, but the pressure will be on as they won’t want to slip any further behind Inter in the Serie A standings early on.

Gazzetta dello Sport do note that Blaise Matuidi and Wojciech Szczesny hold a chance of keeping their respective places in the starting line-up, while Merih Demiral could come in for Matthijs de Ligt.

That shows the level of quality depth that Sarri and the Bianconeri can boast this season, and so it remains to be seen who the Italian tactician feels can give him the best chance of securing victory this weekend.