“Don’t let it slip” will always go down as one of the most iconic moments in Premier League history. If only Gerrard’s infamous post match speech also included him saying he would love it if they won the title, then it probably would never be beaten.

The story is will known as Gerrard’s slip allowed Demba Ba a free run at goal as Liverpool slumped to defeat at home to Chelsea. They would eventually go on to lose the title by two points, so many point to that as being the pivotal moment in their season.

It seems that Jamie Carragher thinks somebody else was responsible for the league title not belonging to Liverpool that season. An article by Sportsbible reported on some comments the former Liverpool defender made to Sky Sports.

Carragher puts the blame on Luis Suarez. talking about the famous biting incident he said: “Someone asked him and he denied it. I think on that, that it cost Liverpool the league the next season. Suarez was banned for five or six games [the following season]. Suarez was the best player by a mile in the league — he scored almost every game.”

He went on to say : “In the first four games he missed, Liverpool lost 1-0 to Southampton and drew at Swansea. They dropped five points.If Suarez is playing, they probably win both of them, but let’s be conservative, you beat Southampton at home.”

It’s interesting to see him say this about Suarez, of course his ban was fully deserved but football is a team game so you can’t fully blame one player. Although Suarez was missing, Liverpool still had a team to play in those games so some blame has to go to the players who played and couldn’t get the results when the Uruguayan was banned.

Is this the moment that cost Liverpool the league title?

It also looks like Suarez has burned his bridges a bit with the Liverpool fans after making the move to Barcelona. The Metro reported on some chants directed at Suarez during the Champions League game between Liverpool and Barca last year which suggest they had turned on him.

It’s easy for a pundit to make comments and blame an unpopular player years after something has happened, but over the course of 38 games, you cannot blame losing the title on the absence of one player for a few of those games.

Interestingly Carragher makes no reference at all to the Gerrard slip against Chelsea, but Gerrard is still a hero with the Liverpool support so he knows that wouldn’t go down so well. 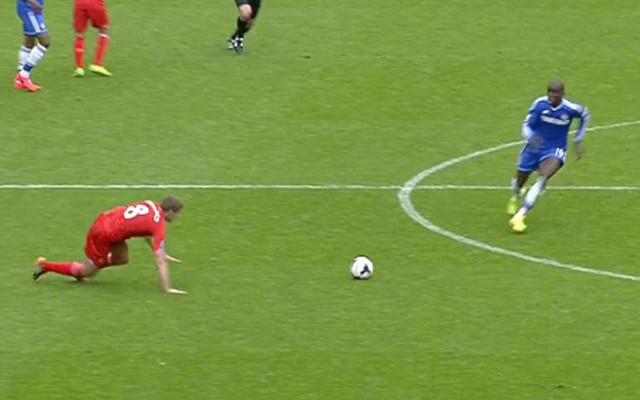