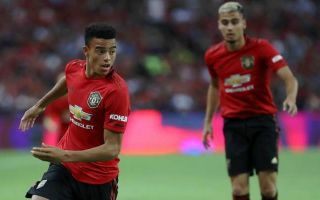 The 17-year-old scored the winner in yesterday’s Europa League match against Astana which was also his first senior goal. Greenwood has featured in five matches for Manchester United this season which is one more than his appearances in 2018/19.

Solskjaer praised the teenager following yesterday’s fixture and also said that there are talks going on regarding a new contract for him. As quoted by the Mirror, the Norwegian said: “If you get him inside the box you know something’s going to happen. He can go inside or outside and it was a great finish through the keeper’s legs.

“For sure it’s natural for him to play football, it’s natural for him to score goals, in and around the box he knows how to hit the ball. Maybe he hit it too hard in the first half and maybe he should have curled it a little bit more, but he shows glimpses of what he can become. We’re always in talks with the boys about how we see the future and Mason’s one we want to keep with us.”

Greenwood has potential and has so far given glimpses of it. There’s no doubt that Solskjaer will give him more playing time as the season progresses. However, it might still be hard to be a starter in Premier League matches but there’s no doubt he’ll be considered for Cup matches. Given his potential, Manchester United will certainly prefer to have Greenwood for a long time.

The Red Devils resume their Premier League campaign on Sunday against West Ham at Old Trafford.