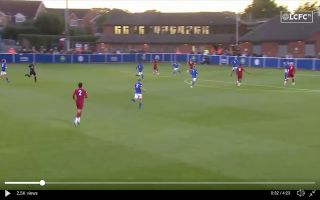 Liverpool ace Curtis Jones scored a stunning goal for the club’s Under-23s side against Leicester this evening, the promising youngster showed off some superb skill.

Neil Critchley’s side got their Premier League 2 tie off to a flying start, in the 9th minute of the clash central midfielder Pedro Chirivella sprayed the ball out to Curtis Jones with a pinpoint pass.

The 18-year-old cut in to the box from the left wing and showed off some lovely skills to dazzle Leicester’s defenders, the ace’s fancy footwork made enough space for a shot and Jones unleashed an effort on goal.

The ace’s strike was deflected into the back of the net.

The match ended 2-2 after Luis Longstaff scored a dramatic late winner for the Reds.

Leicester City’s official Twitter account posted all the goals from the clash, the Reds scored the first and last goals of the game:

All the goals from tonight's #PL2 clash at Holmes Park ??#lcfcu23s pic.twitter.com/PyD5x6JlgU

Jones showed why he was named as the side’s captain for the season with his superb goal. The ace joined the Reds at Under-9s level and has impressed at every level of the academy since.

The youngster is incredibly versatile, he’s played all across midfield during his time at Liverpool and he’ll be hoping that this adaptability increases his chances of getting a chance in the first-team.

Jones is certainly a talent to keep an eye on in the future, the ace has picked up over 20 caps for England’s youth sides across Under-16s, 17s, 18s and 19s level.

Jones’ impressive performance for Liverpool’s Under-23s will lead fans to ask Jurgen Klopp to give the ace some minutes in the first-team.

The attacking midfielder is approaching the period of his career where his development will be well served by heading out on loan or by featuring for the Reds’ first-team in some cup or less important league matches.