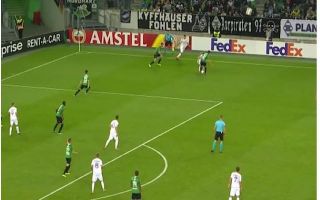 Austrian sides have always been dwarfed by their German counterparts but Wolfsberg managed to get one over on Borussia Monchengladbach with a 4-0 win in Germany last night.

Of course the scoreline was notable, but this nutmeg was the greatest moment of the night as the defender is completely oblivious to the ball going between his legs.

By the time he’s figured out what’s happened the ball is in the back of the net:

The German side have had a pretty decent start to their league season, but this will be a huge blow to their hopes of progressing the the Europa League.