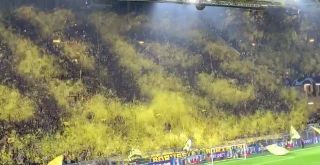 Dortmund and Barcelona cancelled each other out in a goalless stalemate in midweek in the Champions League, but the home fans did their part to provide a spectacle.

As seen in the video below, the Dortmund supporters produced a stunning visual display using confetti ahead of the game as the ‘Yellow Wall’ certainly delivered as it so often does by spelling out ‘BVB’.

It’s quite the sight in itself given how many fans the stand holds and the noise that they create to back their side, but they’re always busy coming up with new ways to put on a show.

In turn, it was a great way to build up to what was hoped to be a great encounter, and although it had its moments, neither side were able to find a breakthrough as they had to settle for a share of the spoils and a point a piece to open up their respective Champions League campaigns.

Can't stop watching this confetti display from Dortmund against Barcelona. ?